ASCII stands for American Standard Code for Information Exchange. It is a character encoding standard developed in the early 60’s for representing and exchanging arbitrary text-based information between computers. It encodes 128 specified characters into 7-bit integers as shown in the table below... Learn more

The website lists down all the characters in the ASCII charset along with their decimal, binary, octal, and hex equivalent. It also contains descriptions for all the ASCII characters.

In this website, you’ll also find several tutorials and articles about How to convert decimal to ASCII and vice versa in various programming languages.

ASCII is an acronym for American Standard Code for Information Exchange. It is a character encoding standard which was developed in the early days of computers for representing and exchanging arbitrary text-based information.

Computers can only understand numbers. Therefore, we need a way to encode characters to numeric form. ASCII encodes 128 specified characters into 7-bit integers so that they can be represented and exchanged easily.

The above table lists all the 128 ASCII characters and their equivalent encoding in decimal, hex, octal, and binary form.

The ASCII table is a collection of all the 128 characters of the ASCII character set.

The ASCII table can be classified into four sections -

The ordering of ASCII characters symbols follows a specific organization known as ASCIIbetical. It is different from the standard Alphabetical order.

The ASCII character set uses the first 32 codes for control characters. The last code 127 that corresponds to Delete (DEL) i These control characters are intended to be used as commands to control devices (such as printers) that make use of ASCII, or to provide additional metadata data streams such as the ones stored on magnetic tapes.

ASCII is a 7-bit character set which is limited to only 128 characters. Unicode has a much wider range of characters in its character set. Their are multiple encoding formats of different sizes used in the Unicode character set like UTF-8, UTF-16, UTF-32.

You can check out the full Extended ASCII table. 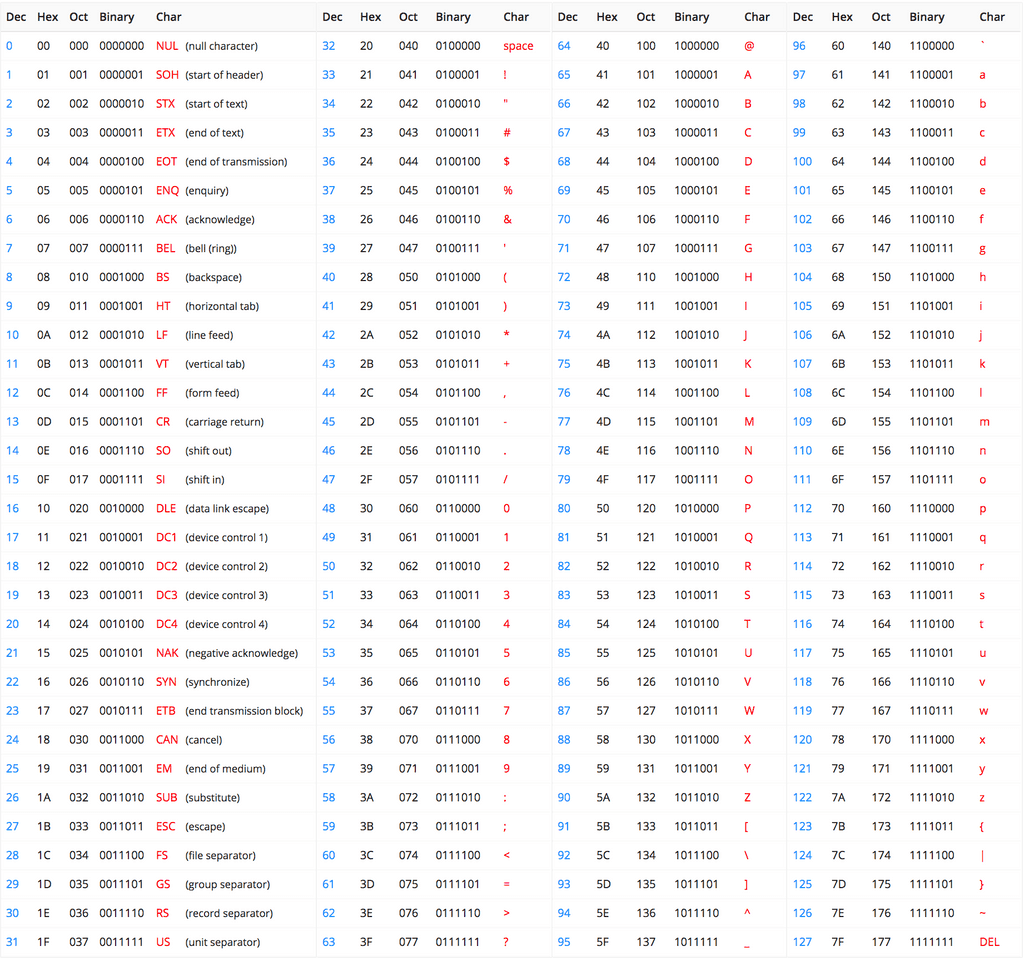 The work on ASCII began in 1961 and the committe decided to use a 7-bit code for ASCII. 7-bit allows 128 characters and it could represent all American english characters and symbols. Moreover, 7 bits also meant minimuized cost while transmitting the data as opposed to 8-bits or 16-bits. The first edition of ASCII standard was published in 1963.

Should I use UTF-8 or ASCII?

Latest from the blog